It’s the normal response: surprised eyes with a hint of, “Oh, you’re that kind of girl,” behind their smile when they find out I’m a pageant mom. For people who are not in the pageant world, they assume it’s all based on beauty with nothing more than reality TV to help shape their perception.

Allow me to pull back the curtain on the reality of pageantry, today.

When my now 10-year-old Zoey was six, she was asked to try out for National American Miss. We did not know anything about pageantry, but we liked how they emphasized being a servant of your community and encouraged girls to be authentic. Zoey entered with no experience, no coach, and a simple dress from Dillard’s. To our amazement, she walked away as the winner of the Top Model competition, placed in the top five in Talent, Casual Wear Modeling, and was third runner up overall with 203 girls competing. We were hooked.

Since that time, both my girls have held Texas titles, Holiday titles, and have found much success with modeling, which led them into acting as well. When my youngest, Lexi, won the title of Wee Miss Texas at age five, she was invited to the Frisco Rough Riders game to be a junior announcer. We’ve had amazing experiences from all over Texas to California, moments that my girls will never forget. 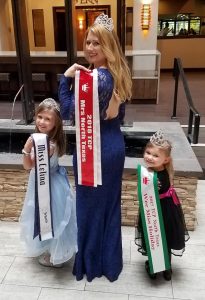 During Lexi’s first pageant, I was told, “You should enter the Mrs. Division,” to which I laughed and thought they were joking. This was said in front of my girls and they both looked up at me and said, “Yes, Mom! You have to!!” My mind tossed around all the reasons I should not enter like, I’m too old, not pretty enough, not fit enough, etc. Every thought I had was fear based and I was raising my girls against that very concept. I’ve taught them to go for things, be brave, and that they are enough. It was my time to believe that and walk the talk.

In May of 2018, I entered my first Mrs. Competition and much to my surprise, won the title of Mrs. North Texas. You know what? I really like wearing heels, fancy dresses, and having my hair and makeup done, but what’s so much better is seeing those two little faces that look up to me beaming in pride. Prior to any pageant, they have told me, “Mom, it doesn’t matter if you win, we’re just so proud of you.” Melts my heart. 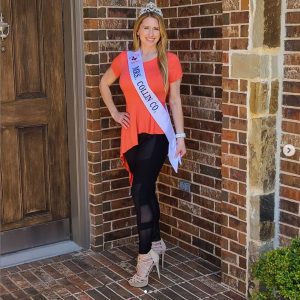 So, I’m getting on a stage in September for the title of Mrs. Texas. I will be interviewed by a panel of judges, wear an evening gown and also a swimsuit. The title of Mrs. Texas has a demanding role and they want the titleholder to take care of herself, and be fit enough to handle the job. I’m excited, scared, but going for it and facing my fears.

Pageantry has taught us so much and allowed us to bring awareness to both local and national charities. My girls have learned life lessons by being interviewed at every competition. Now, when they are grown and interview for a job, they’ll think it’s a breeze. They know what it means to be a representative and servant of their community, to have a platform in which to speak for those who need their voice. They know how to talk to an audience of 1,000, walking in with a confident smile.

Yes, there’s some glitz and glam but it’s a whole lot of confidence building and about serving others. In the end, its not about the crown but knowing you are worthy before it’s ever placed on your head. 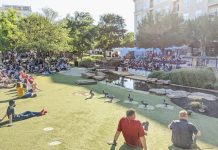 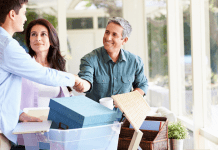 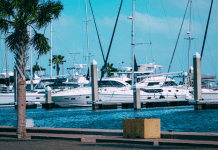