If you haven’t heard me shouting it from the social media rooftops, I gave birth to my daughter, the most darling, precious, squishy Baby Girl in April 2018. (I’m a little over the moon about her.)

As I was shopping for nursery décor, there was THIS sign with the very popular saying around every corner: 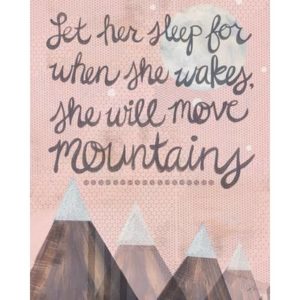 “Let her sleep, for when she wakes, she will move mountains.”

You’ve seen it, and maybe you even have it in YOUR little girl’s nursery.

Per my usual disclaimer: please read to the end of this post.  I am not shaming this lovely quote, but I do have a few thoughts about it.

Clearly, I understand that this saying refers to Baby Girl’s life and future in general. It is whimsical and it makes you daydream about all the possibilities that lie ahead. But I still giggle when I read it in context of a newborn, because realistically, NO, BABY GIRL. When you wake, you WILL NOT move mountains. You will scream, poop, pee, spit up on my favorite scarf, and cause my body and mind to abandon me in ways that I never thought possible. But I guess “Let Her Sleep, For When She Wakes, She Will Projectile Vomit” wouldn’t look very cute on a distressed shiplap board.

Humor aside, I feel like this saying immediately assigns a huge and heavy expectation on our daughters. It declares over their lives: You will do BIG THINGS. You will MOVE MOUNTAINS, Baby Girl. When you wake, you will be a force, an accomplisher, you will push the envelope, you will be not be status quo. Your future is MIGHTY and GRAND and nothing will stand in your way.  (That’s what moving mountains requires, right?)

I know that many of you, (and even a piece of ME!), are breaking out a Beyonce move right now and singing, “WHO RUN THE WORLD? GIRLS!” You’re thinking: “YES! THAT’S GONNA BE MY GIRL!”

But let’s be real. Do you feel like you MOVED A MOUNTAIN today? This week? This YEAR? Or like me, do you feel like you had the above mindset but somewhere between ages 24-35, you woke up with a few kids, a house in the suburbs, and the only mountain you’ve moved today is the mountain of laundry from the dryer to the dining room table. (To eventually be folded, right?.) I’m not trying to be a Debbie Downer, but that’s reality. There are certainly some victories I’ve celebrated over time, but most days, I do not feel like I’m moving mountains. I’m changing diapers, packing lunches, calming tantrums, giving baths, cooking dinner…really, just trying to make it through the day. If you told me I was expected to MOVE MOUNTAINS “when I wake,” I’d ask for three espresso shots and a raincheck.

This saying just leaves me wondering: Since when did being an ordinary, under the radar, average person (and in my case “just a Mom”) become NOT ENOUGH? (Trust me, I’ve had countless people ask me “What I do” as if RAISING THE FUTURE does not count.)

Please don’t get me wrong, I DO have dreams and hopes and ambitions for my daughter, and I expect her to use the gifts and abilities that God has given her. She is only seven months old and I am already reading her the book “Dear Girl,” that affirms that she has meaningful things to say, that she should never stop asking questions and learning. I plan to expose her to a variety of successful women (including many of my own amazing and accomplished friends) who have forged a way for women in the workforce. I will encourage her DAILY that she can be and do anything that she sets her mind to, but I am also determined NOT to add layers of expectations on her.

I want her to simply feel confident in whatever role she’s decided to play. I want her to focus on humility, contentment, and teamwork. Because even the strongest leaders can’t move mountains by themselves.

Our culture (and social media) portrays that exposure and followers and platforms and big success equals relevance. The idea of my daughter thinking this literally makes me sick to my stomach. In a world SATURATED with comparison and pressures of appearance and accomplishment, the last thing she needs to feel is that her own parents expect her to MOVE MOUNTAINS.

What I HOPE to inspire in her is a feeling of “enough-ness”.

She’s ENOUGH whether she wants to be an Accountant, an Author, a School Teacher, an Artist, a Software Developer, a Business Owner, a Counselor, a Performer…. 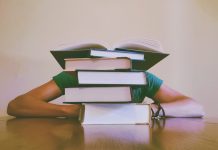 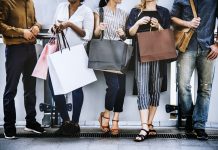 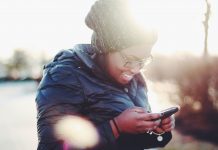